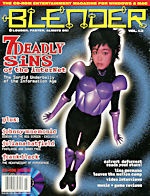 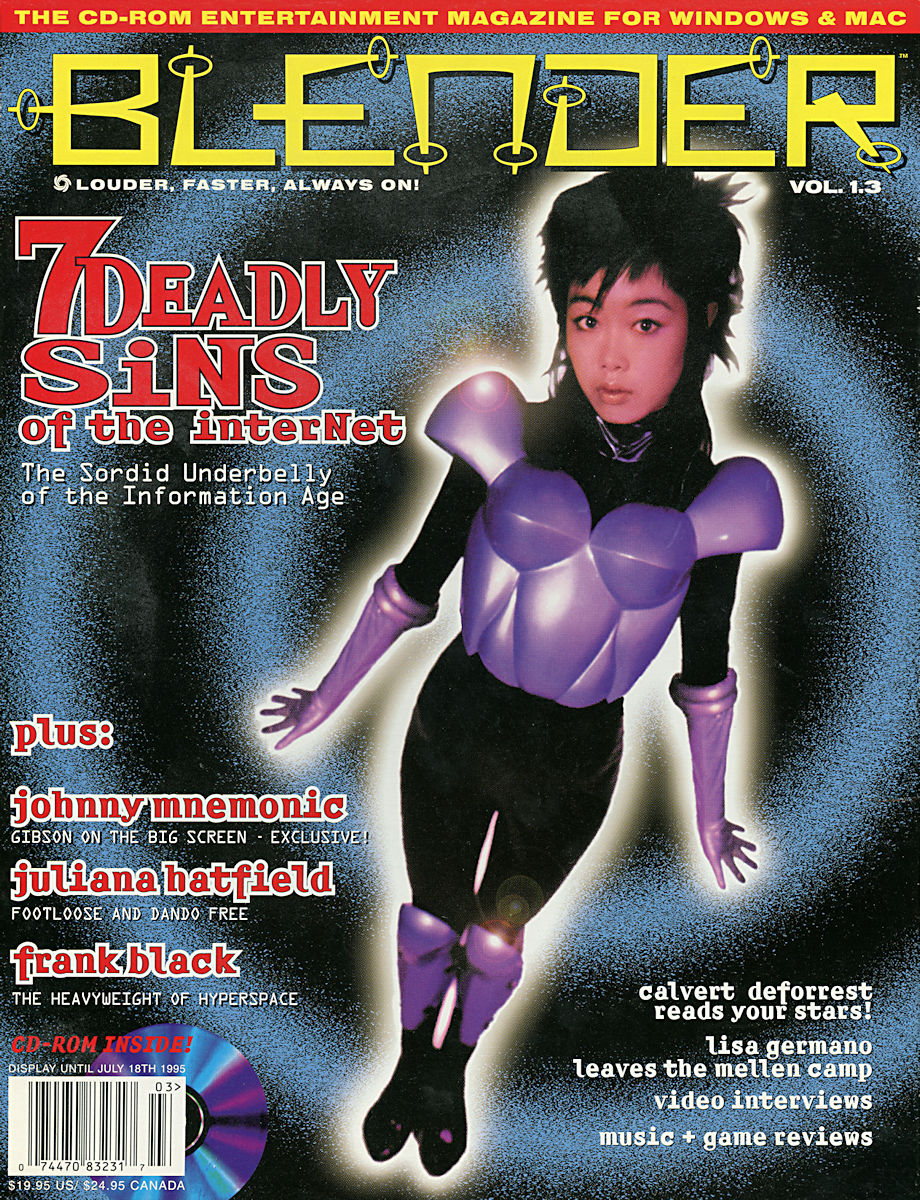 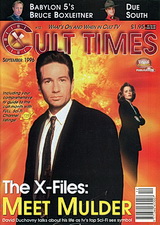 This magazine is similar to TV Zone and ETV (which is advertised on the inside front cover) and covers programmes like the X-Files, Babylon 5, Due South, Fantasy Island, The Incredible Hulk and Neverwhere. There's news of the new series Dark Skies to be shown in 1997, the Cult TV 1996 convention in Haven Calster Holiday Centre in Norfolk on 25-28 October, featuring Gil Gerard, Ed Bishop and Norman Lovett, with registration only £39. The X-Files interview is with David Duchovny, the Bablyon 5 one is with Bruce Boxleitner. Out of the Box is a 30 page TV listings guide for the whole of September, for terrestrial, cable and satellite channels. Sky 2 shows the first series of Sliders again (there's a colour poster of Jerry O'Connell as Quin Mallory in the magazine), the Sci-Fi Channel shows Tales of the Unexpected (currently being repeated on Sky Arts on Freeview at the time of writing) and BBC2 are showing UFO, Neverwhere and Star Trek: Deep Space Nine. Each page is a day and the listings are in time order, so it's a bit confusing trying to find programmes if you don't have access to all the channels. There's some more interviews and at the back there is Times Past, a section about what was worth seeing and missing last month. Thumbs up for The X-Files, Hammer's House of Horror and the premiere of Stargate the movie on Sky, but thumbs down for Automan, although they didn't say what channel it was on.

The articles are full of photos and this issue has plenty on Dodgy, Everything But The Girl, Ash, Bo Diddley, Bryan Adams, Crowded House, Burt Bacharach and Black Grape. The Stories section has news about a charity football match, with a shot of Damon Alban and Liam Galagher and New to Q features Ben Fold Five and Super Furry Animals. Q Charts has the 20 dirtiest places in the world, with non descript ones like under the microwave and Spain, and specific ones like The Northern Line (on the underground) and a WC at Algiers train station. It has a smaller list of the 20 great laughs on record (which I would have preferred to be the main list), with Ha Ha Said The Clown by Manfred Mann and Laughing Gnome by David Bowie. There is a two page spread on the first Glastonbury Festival on 19/20 September 1970, but the Crowded House article is ruined with a Calvin Klein advert inbetween the two page photo. That'll Do Nicelly covers Fan Clubs, which goes on for eight pages, Q Review covers new LPs, imports and re-releases, and of the 200 or so listed, I have three, Republica's self titled album, Crowded House Recurring Dream and in the recommended section, ABC's Lexicon of Love. The Top 40 Albums has 1977 by Ash at number one, but the longest chart album contender is Definately Maybe by Oasis, which had been number one and was spending it's 89th week in the charts at number 21. The computer section has the Sega Saturn version of The Horde (I got this for the PC as an mpeg enhanced version), new films mentioned include Mission:Impossible, Twister and Empire Records, and apart from the Q Questionnaire in the back with Lionel Richie, there's the Phew! Rock 'n' Roll quiz with a line from songs that spell out the opening line from a classic 60's LP track. The prize is a Celestion surround sound system. The free CD has 18 tracks from artists such as Supergrass, Babyloo Zoo, Terrorvision and Radiohead although the only track that isn't a live version that I had heard of before was Dubstar's Stars. Adverts include the Peogeot 306 Cabriolet, Pioneer's PDR-05 CD Recorder and the new album by Beck called Odelay. 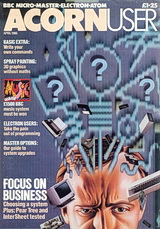 This was the magazine for BBC Microcomputer owners and was where I sold my music demos in the Small Ads section for three issues. There's an advert for the AMX Mouse, something of a novelty for the BBC Beeb, and a competition to win a Master 128 with a monochrome monitor and disc drive, a UMI-2B sequencer package, a Casio CZ-101 synthesizer (worth £345) and 25 runners up prizes of the Ultravox Collection album. All you had to do was send in a three minute song on cassette, and the judging panel including Tony Quinn, editor of Acorn User, Chris Cross from Ultravox, Linton Naiff who designed the UMI and Ed Jones from the London Rock Shop. There are hints and tips for new users, business and education news, including upgrading the word processor View from 2.1 to 3.0 for £23 with an additional £10 for the manual and a further £11.50 for the printer driver routines. The Electron & BBC Micro User Show is shown to be on from May 16 to 18 at the Royal Horticultural Hall in Westminster, with adult tickets £2 and children under 16 £1. There is a review of The Way of the Exploding Fist game, which was number two in the top 20 games (losing to Yie Ar Kung Fu). Adverts include a Quendata DWP 1120 Daisywheel printer for £149, a new Philips Colour Monitor CM8501 for £209 and Viglen weere selling a Dual Disc Drive with Acorn DFS for £337. 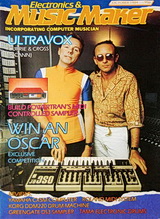 This was one of the first music magazines I bought, although I never managed to follow any of their projects to build anything. This issue has an interview with Ultravox (Billy Currie and Warren Cann, although Warren is not on the cover, but Chris Cross is) detailing their history and the new single Love's Great Adventure. The first part of the latest project is for the Powertran MCS1, a MIDI sampler with 2 seconds of sampling time at 32kHz, but this can be increased to 8 seconds if the rate goes down to 8kHz. It covers the effects and theory of the design, but the five part series concludes in the March 1985 issue. There is the final part of the seven part series on understanding the DX7, although DX9 owners (myself included as it was cheaper) could also find it useful. Patchwork (which continued when the magazine was renamed) had patches for the Korg Poly 800, SCI Pro One, Roland JX3P and a Yamaha DX9. There is a review of the Yamaha CX5M, an MSX Micro with MIDI keyboard and software on cartridges, including voice programming for a DX7/DX9 (on an extra £49 cartridge above the £599 price). Adverts include the Powertran MCS-1 for £499 + VAT in kit form, or £699 + VAT ready built, the Yamaha KX5 remote keyboard (no price), the PPG Wave 2.2 and 2.3 synths (again, no price), a Roland SH-101 for £339, a Prophet 600 for £1375 and a Roland TR909 for £789. 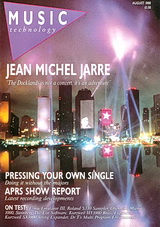 This was the new name for E&MM, and it moved away from the home built projects. This issue has reviews of Yamaha G10 MIDI Guitar System, Ensoniq EPS Sampler, the E-Mu Systems Emulator III, Roland S330 Sampling Module and the Kurzweil 1000HX/1000SX Sample Expanders. There are interviews with Jean Michel-Jarre ahead of his London Docklands concert, Ellis, Beggs & Howard, and Thomas Leer and Claudia Brücken about their group Act. Patchwork is still their with voices for synths (I would get one published in the June 1989 issue). Vinyl Takes review Superfly Guy, the new single from S-Express and Megablast from Bomb the Bass. Adverts include the Kawai K1 (no price), the Akai ASQ-10 sequencer, the Fostex X30 four track cassette recorder (suggested price £329) and the Korg M1 Music Workstation. In the shop adverts you could get a secondhand DX7 for £575, a secondhand TR707 drum machine for £299 and the new Casio FZ1 Sampler for only £1199. The new synth on the block was the Roland D-50, advertised on the inside cover and cost £1350 on one of the few adverts that did have it marked as £POA. 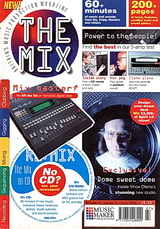 The new name for Music Technology magazine (which was Electronics & Music Maker) it steared more towards mixing music (hence the name). The cover CD didn't come in a jewel case, but they did print a cover for you to cut out and put in a standard case. Still, one of the rival magazines at the time, Future Music, managed a proper jewel case for their CD. The disc is mixed mode and the CD-ROM has some demo software and MIDI files for PC and Mac. The audio tracks include demos of the Roland GR09 guitar synth, some sample loops, four mixes of Visage's Fade to Grey (crossfaded and not complete) and some exclusive mixes of tracks by This Beautiful People and No Man (never heard of them myself). The magazine has interviews with Dieter Meier from Yello, Vince Clarke, a piece about the stage show for East 17, a full review of the GR09 (£749), the Sound Blaster 16 card for PC (£219), the Yamaha ProMix 01 (£1878), the Tascam M2600 mixer (£2499-£3799), the Kam GM25 DJ mixer (£99.95) and the Fostex RD8, 8 track ADAT digital multitrack (a snip at £4559). Adverts include the Alesis QuadraSynth (no price), Roland S-760 rackmount sampler (no price) and the Korg X3 Workstation (£1249). 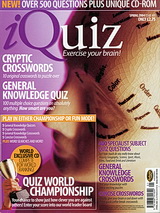 What started as a new publication turned out to be the only issue, and it's nothing to do with a certain fruit named technology firm either. There are three pages describing the unique and world exclusive CD-ROM, two phrases that seem redundant. The disc has 5 sets of 4 different crossword types, plus word searches and jigsaws. If you play the crosswords in competition mode you can enter your name and town and enter your score to the world league (they were abitious if nothing else). Then in the magazine you have 10 Cryptic crosswords, 10 General Knowledge ones and finally 10 Concise ones. Except you don't; there are 10 cryptic ones, but only 4 general knowledge ones and 11 concise ones. I checked that the answers near the back are correct but mislabelled. Then there is a 100 question multiple choice quiz, 50 questions on literature and language (the last ten are super hard), 50 questions on film and television, 50 on food and drink, 50 on geography 50 on science, maths and nature, 50 on history, 50 on music and 50 on sports, games and pastimes. Scattered amongst these are adverts for books and websites, boxes with facts about chocolate, the different champagne bottle sizes, the Bond filmography and other interest stuff, like the longest serving actress in Hollywood (Lillian Gish, who was credited in films from 1912 to 1987). The answers section has a little bit of extra info with the answers and the last page has a 20 question quiz about quotations. I suspect it would only be published four times a year as this issue is marked as Spring 2004, but even then I think they would have had difficulty generating the questions.