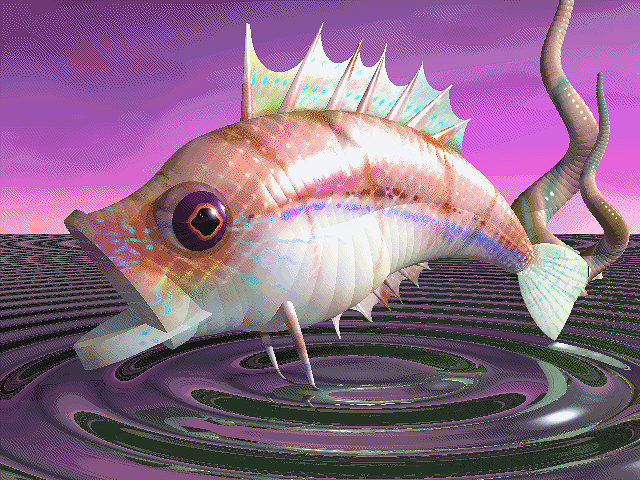 As a huge admirer of Ridley Scott's epic science fiction thriller, I wondered how on earth Westwood Studios would be able to capture, in an adventure game, the stunning atmosphere of such a great film. Scott's film, set in Los Angeles in 2019, was full of moody, sometimes sombre scenes. His concept of a dark, retro, futuristic city, plagued by pollution and acid rain, mixed with multiculturalism and fast food restaurants made the film totally absorbing. It was then, with some trepidation, that I loaded the game onto my PC. The game comes on four CDs, and runs solely in Windows 95, using Direct X5. After accepting the software licence, you have three click boxes, to install the files for the games, to install Planet Westwood - a program to enable you to chat to other players of Westwood games, and/or to install Direct X audio and video drivers. You then choose what type of installation you want, minimum (177Mb), medium (332Mb) or maximum (1513Mb). The choices vary the amount of data that is stored on your hard disc, and if you choose the minimum, only the first disc is needed for installation. When it has finished you can return to Windows or run the game.

I was immediately stunned by the quality of the game's prologue. Westwood had captured the film's atmosphere completely. Nothing was lost. The programming team's attention to detail was second to none, even down to the fizz of neon lights and the steam from the manhole covers. As most new adventure or interactive games go, I suspected that this trailer would be it in terms of the quality of the graphics for the rest of the game. To my astonishment the game continued in much the same vein, from moody, dimly lit alleyways to the bright florescent sushi bars.

The game follows a similar plot to that of the film. You play Ray McCoy, a Blade Runner and your task is to seek out a number of replicants who have returned to earth from the off world colonies illegally. You wonder around numerous scenes obtaining information pertaining to various crimes that have been committed by the replicants. New clues open up a wider area for you to look in. There are plenty of different characters to interview and these characters, like you, move from scene to scene carrying on with their own business. Do not be puzzled if you want to question a character and find that he is no longer there. The game play is somewhat limited and on occasions the number of crimes and people that you are investigating makes it all a little confusing. At times I felt that I was just following along rather than getting involved and solving puzzles. The game does however allow you to mould your own character. You can choose whether you want to take the gentle, understanding approach or be as hard as nails. The way you temper your character will effect the outcome of the game. There are 13 different conclusions to the game in all! This lends itself to the replay value of the game.

The many movie cut-scenes are excellent and are high resolution. The animated 3D backgrounds meant that wondering around the various scenes were made that much more realistic. This realism is something that is lacking in so many modern adventure games. I did find, however, the acting to be of an average quality and some of the voices given to the characters poor. The ambient sound effects nevertheless, more than made up for this. The sound of rain falling or the hum of machinery just added to the atmosphere. I did feel that the Vangelis soundtrack was under-utilised and could have added to the already wonderful ambience.

The interface is easy to use with a simple click on a location or direction to move your character. If you double click at a location Ray runs faster in that direction. By clicking on the character himself, you bring up the interface that allows you to load or save your game, alter the volume levels, bring up the Esper machine interface to enhance photos (with the same sounds as the film). You can also alter the mood that he is in, which will effect the direction you take and ultimately the outcome of the game. The righ hand mouse button brings up your gun, with which you can practise with at the Police Station target range. You can also run the Voight-Kampff test on replicants at certain points in the game, which is where you train a camera on the eye and test for emotional responses to questions by watching for dilation of the iris.

In all, I would say, that this is a great game for the atmosphere alone. I did find the game play a little short of involvement but with all those endings you could spend days playing. This game is a must for any fans of the film and value for money at around £25.00.

Alternatives: The Dig by LucasArts, Pandora Directive by Virgin.